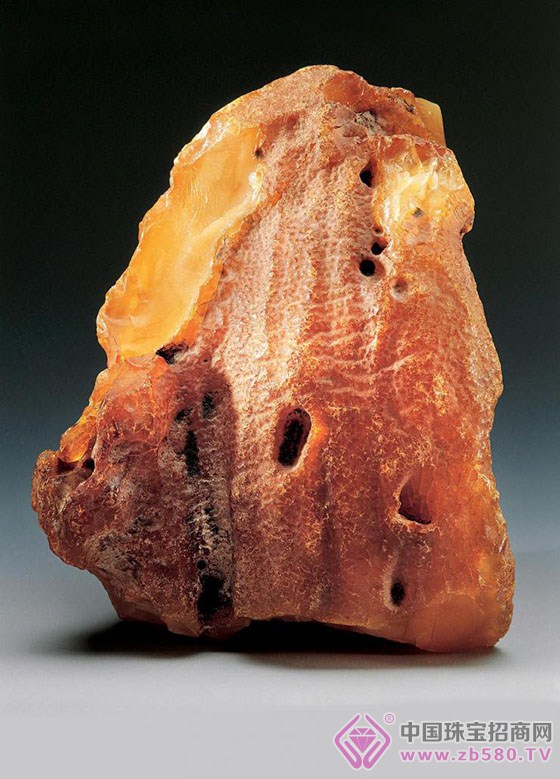 Coal mining, if you dig out coal gangue with low carbon content, it will most often be accompanied by a "waste" and then thrown aside. It seems that no one has ever discovered that these gangues may contain "gems".

A few days ago, people with good luck and good eyes discovered this kind of "gem" - the color is bright, the appearance is similar to amber, the hardness and density are higher than amber, and the processed jewelry is especially exquisite, which makes the jewelry sellers marvel. It was initially identified by the Chinese Academy of Sciences as a new "resin fossil".

On November 14th, the reporter interviewed Wang Lijun, a fan of Changzhi County antiques collection, and saw the "gems" and finely processed products he came back from.

A baby found in the gangue heap

In the Lidu Painting and Calligraphy Institute of Changzhi County, the reporter placed a few pieces of black coal on the table of Wang Lizhen. The middle part of the cut was mixed with a large number of transparent crystals of yellowish brown. Next to the beautiful objects such as necklaces, bracelets and seals, there are seven or eight colors such as yellow, brown and wine red.

Wang Lijun, the owner of the object, said that this is the "gem" found in coal gangue. It belongs to the new generation of resin fossils. In the end, it is necessary to study the experts before giving a name. In the ancient times, the trees in the virgin forest were buried underground. The high pressure and oxygen deficiency formed coal. The resin and gum were gradually petrified in the coal seam, forming a resin fossil.

Wang Lijun introduced that he is fond of collecting paintings and antiques. On November 5 last year, a friend brought in two gleaming yellow stones, which were said to be from the pebbles of the Yongfeng Coal Mine in the Southern Song Dynasty of Changzhi County. I wanted him to see what it was. This thing is more crystal clear under the illumination of strong light. Although Wang Lizhen has not seen it, he still realizes that this stone is not ordinary.

Driven by curiosity, Wang Lijun began to look for similar stones. He walked into the Shishishan of more than 80 coal mines in Changzhi and Jincheng, visited many first-line technicians and coal engineering technicians, consulted a large number of coal mining materials, and found this stone by consulting with geotechnical personnel. It is irregularly distributed in the roof of the coal seam and is difficult to be noticed. It is usually found in coal mines producing No. 3 and No. 9 coal.

B is looking for answers to identify

In order to verify the identity of these stones, Wang Lijun and his partner Jiao Bo went to the Peking University Jewelry Appraisal Center, China University of Geosciences Jewelry Appraisal Center and China Jewelry Testing Center to find experts for testing and certification. After the experts observed it through the naked eye, it was unanimously determined that it belonged to coal seams, and after testing by professional instruments, it was said that the stone was first discovered in the market, and the testing organization could not find relevant data. But what is certain is that the stone is more beautiful than the amber and beeswax that it sees everyday, and its hardness and density are much higher. "After we turned a large circle, we found out that no one in the market has ever verified such a thing. It is wrong to find a jewelry appraisal center itself. Or do a chemical analysis and see that the bottom contains bismuth ingredients." Subsequently, Wang Lizhen and Jiao Bo went to Qingdao Kebiao Chemical Analysis and Testing Co., Ltd., an authoritative department recognized by the China National Accreditation Service for Conformity Assessment, for professional testing.

Professional mechanical testing shows that the resin fossil in Wang Lijun's hands contains 30 kinds of trace elements (including 27 kinds of metals such as calcium, magnesium, titanium, lithium and potassium, and three non-metallic main elements of carbon, hydrogen and oxygen). It contains 18% oxygen, 6.3% hydrogen, and 63% carbon, while amber contains 10.5% oxygen, 10.5% hydrogen, and 79% carbon. That is to say, this kind of resin fossil contains various kinds of metal and non-metal elements than the existing amber, and does not contain radioactive elements harmful to the human body. It was initially recognized by the Chinese Academy of Sciences as a new kind of " Organic gemstones."

Since this stone was produced in coal and coal gangue, Wang Lijun initially determined that the stone was an associated product of coal and a new generation of resin fossils. The formation of coal in our province is about 300 million years. These fossils, as the companion of coal, are the same age as coal. They should exist in the Permian of the Paleozoic, about 260 million years ago. Wang Lizhen said that the ancient books of amber origin in China are recorded in Yunnan and northern Myanmar. In recent times, there are documents in Xinjiang that also have amber output in Xinjiang. The main producing areas of amber in China are Fushun in Liaoning and Xixia in Henan. Liaoning Fushun amber is formed in the Eocene from 35 million years ago to 59 million years ago, while the amber in Xixia County is about 100 million years ago. It is concluded that the resin fossils in the Changzhi and Jincheng areas of our province were formed much earlier than Xixia amber and Fushun amber, so the hardness and density were higher than those of the two ambers.

Since the stone is unevenly distributed in the coal seam, even if it is found, it is often thrown away by the coal mine as a waste product like coal gangue, and buried again in the soil. In the past few years, after the spontaneous combustion of the gangue mountain in the Holsinghe coal mine in Changzi County, it was burned for a winter. The general gangue stone burning point is very low, but the meteorite with resin fossil can burn. In view of this, Wang Lizhen is very anxious, he decided to save this baby buried under the ground as soon as possible through his own efforts.

After many times of grinding and cutting, Wang Lizhen produced a series of exquisite ornaments, which he could not put down his hand, and at the same time increased his confidence and determination in the research and processing of "treasures".

Wang Lizhen found that after the resin fossils were polished, the appearance was like a gemstone, and the embryo body showed black spots, and the multi-color blended and integrated. The beads made with it are warm in winter and cool in summer, and are placed in the hands of warm and jade.

In September this year, Wang Lizhen participated in the Shanxi Coal Expo Jewelry Fair with his own resin fossil jewelry. When he put a string of 108 beads on the stand, the jewel sellers were amazed and gave thumbs up. Experts in the industry even claimed that they believe that the material of this series of beads is not only the warmth of jade, but also the spar of the spar. It is extremely rare and very domineering. â€œOur province is a large coal province. No one has discovered this resin fossil. It is unprotected and it is buried in the underground as a coal gangue. It is really regrettable.â€ Wang Lizhen told reporters that a Tongji University specializes in amber. After seeing the resin fossil, the experts believe that it has exceeded the scope of common amber and beeswax, and to determine its value clearly, it needs a national appraisal department to do further analysis, and this is his most worrying point. "I sincerely hope that some people will use this resin fossil as a special research topic, and give these resin fossils an 'identity card, if possible, as an industry to protect and exploit." Wang Lizhen said that if this The value of resin fossils has been certified and won the favor of consumers. It not only saved the precious resources that nature has given to human beings, but also brought business opportunities for the re-appreciation and redevelopment of our province's coal industry.