Experts teach you how to collect and identify tourmaline 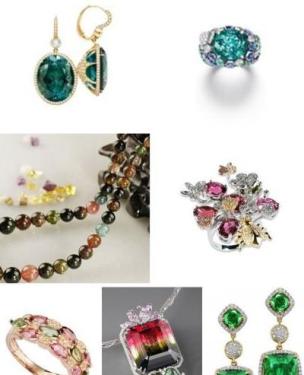 The wide distribution of tourmalines is not as â€œpettyâ€ as Myanmarâ€™s old pit jade. The tourmaline deposits are usually located in the pegmatites and alluvial deposits. Among them, the most productive tourmaline deposits are Sri Lanka and Madagascar, and Brazil again. Brazil is famous for producing red, green and blue tourmaline. It recently discovered a special color called â€œParaibaâ€. Its color is different from that of other precious stones. It is blue in green, like the green lake, because of the scarce production, so the price Very expensive. The United States in the Americas also produces a lot of tourmaline, among which California is best known for red tourmaline, Maine is red, green and watermelon tourmaline, and other countries such as New York, Connecticut and Colorado also produce tourmaline. The finest red and bicolour tourmalines are from Mozambique. Angola, Australia, Myanmar, India, Rhodesia (the Republic of New Jersey), ****, Tanzania, Thailand, Russia, and other countries also produce tourmaline.

The tourmalines are more expensive in red and blue, yellow and green are more common. At the present time, the highest price for the tourmaline is Parayaba, which is found in Brazil in 1989. Since mining is not easy and the crystals are not large, the price has remained high and the price can reach 20,000 US dollars per carat. Red is also of high value in tourmalines, with purple and rose red being the best. In China, it is called "baby face." More valuable is the appearance of two or more colors on the same tourmaline. This tourmaline often has ribbons (two-, three-, and multi-colored) or concentric bands distributed along the long axis of the crystal. The ribbons that are distributed, often called "watermelon tourmalines", are highly respected when they are green inside.

In the market, some dealers selling jadeite often refer to it as a kind of crystal when they introduce tourmaline, which makes many people mistakenly believe that tourmaline is a crystal with a low price. In fact, tourmalines and crystals are two distinct minerals. In the jewellery industry, tourmalines are high-grade gemstones. High-quality tourmalines are even rarer than diamonds. Crystals are ordinary gemstones.

Believe that people who pay attention to tourmaline are more or less heard that it not only has a bright and colorful coat, and long-term wearing tourmaline also has certain health effects. For example, a 0.06 mA micro-current, which basically matches the bioelectricity of human body, flows on the surface of tourmaline, and it can supplement and adjust the bioelectricity of the human body at any time, allowing the pathological potential to return to normal, and allowing the bioelectrical rules that are damaged by electromagnetic waves and other harmful radiations to return to normal. Can also release negative ions, often worn to maintain normal body function. In addition, tourmaline can also release far-infrared rays, promote blood circulation, strengthen metabolism, increase regenerative capacity, and improve immunity.

In fact, from a scientific point of view, these "health-care effects" are only a beautiful misunderstanding. All of their origins stem from the dazzling colors of Tourmaline. The tourmaline is the most abundant gem of color because of its own chemical composition. The more cations in tourmaline, the richer its color. For example, the most famous Paraiba tourmaline, because it contains copper ions, it turned out to be such a beautiful color.

But it is worth noting that these trace elements cannot promote human health through wearing, and do not say how small its trace elements are. Chemically, it has long been conclusive that in the solid state of matter, its internal elements will undergo a nanometer migration that will take tens of thousands of years to complete. Therefore, in theory, this trace element that affects people does not exist at all. From the current research results, it is even more unproven.

Most of the colored gems in tourmaline gemstones have their own color, such as ruby â€‹â€‹and spinel is a model of red, sapphire and aquamarine represent the elegance of blue. However, there are some gemstones that are loved by people because it can display the charm of different colors. The most typical is the tourmaline, the colorful candy of gemstones.

Color changeable prices The color of the folk tourmaline has never been strictly defined in gemology. It is only because any hue can be displayed by the tourmaline. The gemstone contains one or a few trace elements, such as magnesium, sodium, lithium, Iron, potassium, etc., create a beautiful and changeable color of tourmaline. Rose red, pink, orange, turquoise, azure or even black ... changeable colors, higher hardness (Mohs hardness 7-8), and moderate price make it very suitable for everyday wear. In recent years, the jewellery circle has set off a new round of tourmaline fever, and the price of the better tourmaline ring has soared to several thousand dollars per carat.

As a place of origin in China, tourmaline was very familiar with the country. As early as eighteen years of Tang Zhenguan, the tourmaline, which had flown in through the West, was engraved into jade, and its name also came. In the late Qing dynasty, Empress Dowager Cixi, who was alone in the administration of the imperial government, had a special liking for the tourmaline. The tourmaline became a symbol of power at that time. It not only appeared in the top garlands of officials of the first and second grades of the court, but also collected all kinds of fine art objects from the court. Even today, some antique brass arts and crafts can still be found in the auction houses and are deeply loved by senior collectors.

The blue color of the top grade tourmaline can be subdivided into more than 10 categories according to the color and the trace elements contained therein, among which the blue is the highest grade, and the most precious and rare of the blue tourmaline is the Paraiba Tourmaline, which is mainly produced in Brazil ( Paraiba). Unlike ordinary indigo blue tourmalines, Paraiba tourmaline, due to the inclusion of copper, reveals a clear electroluminescent blue with neon glory. The real Paraiba tourmaline can only mine dozens of carats each year, and the price is several times that of diamonds. The CHAUMET "BeeMyLove" ring in the picture uses the top Paraiba tourmaline, with different shades of sapphire, safranite and diamonds, creating the most unique and harmonious visual color.

Compared with some precious stones (such as red sapphire or emerald), tourmaline has great advantages in terms of price, and at the same time, the choice of colors and particle sizes can meet the needs of different age groups and consumer groups. In recent years, the prices of tourmaline have risen all the time. At the same time, there are fewer and fewer high-quality tourmalines on the market. Therefore, high-quality tourmalines have a large collection and appreciation space.

The price difference between the tourmalines is of a high quality and the prices are also very different. The top Paraiba Tourmaline can reach more than 100,000 yuan a carat, and the most common tourmaline bracelets can sometimes be included in a few hundred. When purchasing the best Paraiba tourmaline, it is absolutely necessary to have the business show an authoritative international inspection certificate, such as a GRS or GIA certificate. When purchasing high-quality monochrome or bicolor tourmaline bare stones, checking the national inspection certificate can determine whether the gems have been optimized manually.

The color of the tourmaline is varied in color, among which the blue, red and green are the most expensive, the colors are bright and uniform, and the interior is transparent and free of impurities; for preference, there may be tourmalines with two or more colors, such as red and green. Watermelon tourmaline, pink orange tourmaline and so on. When choosing beaded bracelets or necklaces, you can choose a multi-colored combination of blue, red, green, yellow, and purple.

Maintenance Tips Although the hardness is higher, the crispness is also higher. Try to avoid collisions and friction during wear, and minimize the damage caused by multiple inlays. Because of its thermoelectricity, tourmaline is also called â€œtourmalineâ€. It has the characteristics of attracting and excluding light substances, it is easy to attach dust, and can be wiped with a soft cloth during wearing.